Anyone who has read Philo knows that he can come up with some very strange but also remarkably insightful interpretations of scripture.

Philo, an Alexandrian Jew and a near contemporary of Jesus (b. 20 B.C.E.) used what is called allegorical interpretation.  That is, he would look at OT passages and apply them allegorically to his present situation.

One such interpretation has implications for the application of rhetoric to NT texts, that is his treatise Quod Deterius Potiori Insidiari Soleat (That the Worse is Wont to Attack the Better.).

In this treatise Philo applies an allegorical interpretation to the story of Cain and Abel.  It is clear that he is using the LXX translation of Genesis because of the textual problem with the Hebrew text.  The Greek text translates as "Cain said to his brother Abel, 'Let us go out to the field.'" The Hebrew on the other hand is missing the second clause and simply reads, "Cain said to his brother Abel."

The field is necessary for Philo's interpretation.  He argues that Cain, by inviting his brother to the field (or plain) is actually inviting him to a battle.  Not to a battle with weapons, but to a battle of words, a rhetorical contest so to speak.

For Philo, Cain is merely a lover of self, while Abel is a lover of virtue.  Abel has the truth and virtue on his side, but Cain has the power of words.

Philo argues that Abel should have refused the invitation knowing that he was not as gifted a rhetorician as Cain and that he would be slain. 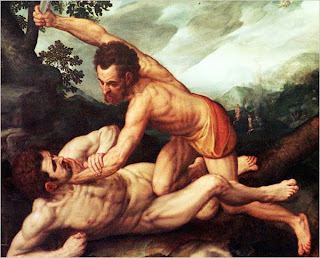 What Philo is referring to is the practice of the Sophists of his day to make the worse argument the better.  Essentially, to use their rhetorical skill for unjust and wicked purposes, to defend the morally indefensible through lofty words.

So, what does this mean for NT rhetorical critics.  It is evidence of a sophistic movement at the time of Jesus and into the time of the writing of NT documents.  It is also evidence, in my opinion, that rhetoric was pervasive in the culture, and that in order to gain a hearing for one's message, one needed to present it in a rhetorically persuasive manner.  I have found evidence of such rhetorical arguments in the NT and this blog means to point out some of these rhetorical devices.
Posted by Keith Reich at 2:07 PM