Rhetoric in the News

I have a general conception of what the average person thinks about rhetoric, but just to test this idea, I thought I would try and find a way to gauge just what the public thinks.  In our wonderful technological age, one way to do this is to do a google search.  At least it will demonstrate the use of rhetoric in digital print.

A simple google search on the term rhetoric brings up 22,800,000 hits.  Wikipedia's definition is first on the list, followed by Dictionary.com and Webster's dictionary.  Their are a couple of sites dedicated to rhetoric, and a couple of links to Aristotle's Ars Rhetorica.

I pulled up the three dictionary entries, and only one surprised me.  Wikipedia gave a definition grounded in Aristotle, as did Webster, but the Dictionary.com entry was shocking to me, not as a commonly held view, but as a dictionary definition.  Dictionary.com's definition is as follows:


"(in writing or speech) the undue use of exaggeration or display; bombast."

That was the first definition.  There are subsequent definitions that are more in line with the classical formulation, but that one was first.  Interestingly, I think that Dictionary.com at least has the pulse of the public view of rhetoric.  But how do we test this?  Again to the rescue, google news search.  This will show how the word is actually being used by journalists.

Look that the following headlines:

Raise in rhetoric but not in pay by Plymouth Council

Rhetoric on immigration does nothing but scare

These are just on the first page.  In every one of these headlines, rhetoric is used in a negative way.  In essence, rhetoric stands in for the term "lies." I think these headlines get very much at the heart of what most people think of when they think of rhetoric.  They think that rhetoric is a way of telling lies in a way that doesn't sound so bad.  It is the "dressing up" of lies, or at least distortions of truth and making them sound good. 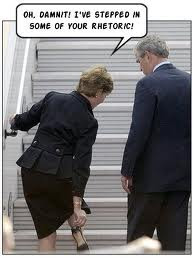 In an interesting side note, a google image search has this image on the first page.  It reinforces the view demonstrated by the headlines, namely that rhetoric is just a pile of $#!+.

So, where does this conception of rhetoric come from? It is not entirely without basis.  Rhetoric can be used, and too often is used, to "dress up" lies.  Yet, is this its only use?  If so, I would understand an outright condemnation of rhetoric, as some see 1 Cor. 2: 1-5 (see last post).  Yet, I think that rhetoric can also be used to communicate truth.  I think the biblical writers used it in such a manner.