With the following words Paul talks about his own preaching and Christian proclamation:

1Cor. 2:1 When I came to you, brothers and sisters, I did not come proclaiming the mystery of God to you in lofty words or wisdom.
1Cor. 2:2 For I decided to know nothing among you except Jesus Christ, and him crucified.
1Cor. 2:3 And I came to you in weakness and in fear and in much trembling.
1Cor. 2:4 My speech and my proclamation were not with plausible words of wisdom, but with a demonstration of the Spirit and of power,
1Cor. 2:5 so that your faith might rest not on human wisdom but on the power of God.

Some, including Corin Mihaila, on whose book I just completed a review for RBL, claim that these five verses are Paul's condemnation and rejection of rhetoric, specifically in Christian preaching.  I will leave the specifics for the release of the review, but for now I will only say that Mihaila, who really takes his cue from Bruce Winter's book Philo and Paul among the Sophists, claims that the word "wisdom" (sophia) in this passage refers to "sophistic rhetoric."

Thus, when Paul claims that he did not come with "lofty words of sophia," or that the Corinthians' faith should not rest on "human sophia," he is talking specifically about sophistic rhetoric.

For a background on sophistic rhetoric, or more specifically, the "Second Sophistic" movement, one should look at Winter's book.  He discusses not only the specific use of rhetoric by sophists in the second sophistic movement, he notes that the movement was already present in the first century, counter to some mainstream scholarship.  The existence of the second sophistic in the first century has great implications for NT scholarship.  It raises the level of rhetorical awareness present in the Greco-Roman world at the time of the writing of NT documents. 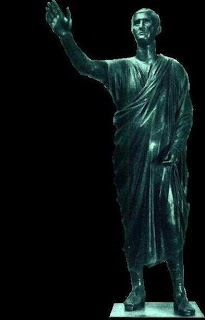 Another aspect of the second sophistic which Winter points out, has little to do with rhetoric, but rather with social practice.  Sophistic rhetors paraded around like present day movie stars.  They acquired an entourage of admirers as they traveled from city to city giving wonderful panegyrics to each city they visited.  The size and social status of their entourage depended upon their rhetorical skill.  The entourage members could gain status through their association with a gifted orator.

The question to be asked is whether Paul in I Cor. 2:1-5 is condemning all rhetoric, or rather, its specific application by the sophists and the social model that the sophists represented?  I think, given Paul's rhetorically gifted writing style, that the latter is more appropriate, but this question will receive greater attention as this blog rolls along.
Posted by Keith Reich at 12:08 PM