Today, because our church was so full I was asked to sit in the Narthex of the church in order to make room for visitors.  It made me think of something that has always puzzled me, and that is why my church calls the foyer the Narthex. 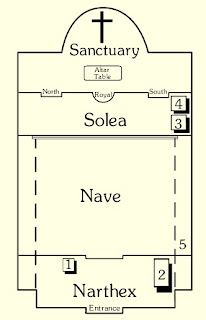 The Narthex was a common element of Roman Catholic and Eastern Orthodox church architecture.  A Narthex is the traditional name for the entrance to a church that is not considered part of the church itself.  It was where those who were not considered worthy (such as catechumens, but not full members) were allowed to come to hear the service, while not entering (and perhaps defiling) the sacred space of the church proper.  As time went on, this distinction between full members and non-members was lost, but the Narthex remained.

So, what does my church communicate by their labeling of the church entrance hall as a Narthex?  They are communicating through uncommon language the sense that the church is a sacred space.  They are communicating that in entering the church, one is stepping on hallowed ground.  Not because the church itself (i.e., the building) is holy in its own right, but rather, that this is the place that God comes to meet his people.  The use of this word also tells the congregation that it is trying to reclaim church traditions rather than throw them aside in an attempt to be "inviting." Is the naming of the church foyer a Narthex a wise choice?  I am not sure, but I can tell you it was deliberate and clearly communicates a great deal about the message and stance of the church.
Posted by Keith Reich at 6:55 PM