I live in Waco, Tx, a fairly conservative city in the midst of a very conservative state, and on I 35 between Dallas and Waco, there is an interesting billboard.  I was not able to get a picture of the billboard, but found pictures of the same message on a google image search. 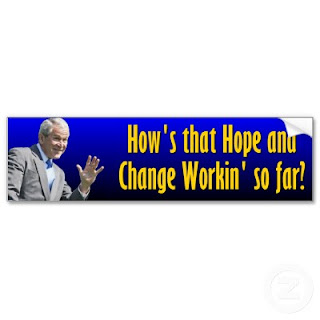 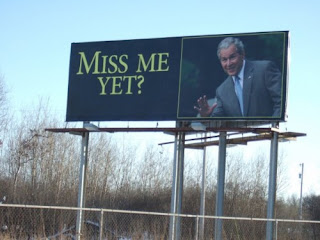 The billboard near Dallas actually combines the two messages.

This billboard demonstrates the power of the rhetorical question.  These two questions are not supposed to be answered.  They make a point.  They reinforce what the audience is already predisposed to believe, and they do so in a striking and forceful fashion.  The rhetorical question elicits a response from the audience.  It makes the audience own the answer.  Placing this statement in question form is more powerful than just leaving it as a statement.  The two questions are better and more forceful in question form than if the billboard were to say, "Obama's hope and change sucks!" or "I really miss George Bush!"  Inviting audience participation makes the comment resonate on a personal level.

This billboard, standing in the midst of an already conservative state, conveys its simple message using the rhetorical figure: rhetorical question.  One thing about this figure is that it works.  Perhaps that is why, of all of the figures of speech used by the Lukan Jesus, the rhetorical question is his favorite.
Posted by Keith Reich at 8:37 AM