The Neutrality of Rhetoric

As I pointed out in a recent post, the common view of rhetoric is that it is a bad thing, it is merely the use of language to cover up lies.  Rhetoric is usually used as a dismissive term, as a way to ignore one's opponents arguments by claiming that any force their position has is due to the rhetorical use of language.  If this were in fact the case, that rhetoric could only be used to hide the truth and to cover lies, then my whole blog would be in vain.

Instead, I would like to argue that rhetoric is in fact a neutral art.  In itself, the art of persuasion and speaking well has no moral component.  Yet, it can be used by the moral and the immoral alike. 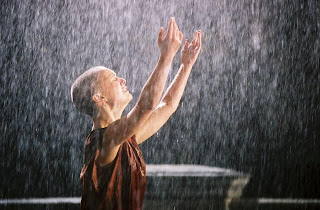 One of my favorite movie quotes sums up this sentiment nicely.  In the 2006 blockbuster movie V for Vendetta, the heroine Evey says the following:


What she means of course is that an artist use "lies" to get at some truth through the medium of their art.  A painter does not paint reality as it really is, and thus, "lies," but is trying to portray a greater truth through that "lie."  A storyteller tells "lies," but only to proclaim a deeper truth.  Jesus, in this sense, was a big "liar" in that much of his teaching consisted of fictional (read lies) stories in the form of what we call parables.  In a sense, storytelling is very much like rhetoric, one uses the story as a means of persuasion.

If I were to reformulate this quote to apply to rhetoric, one might say, "The good person uses rhetoric to persuasively communicate the truth, while sophists use rhetoric to persuasively obscure the truth."  Rhetoric is in itself neutral, it can be used for good or evil, to proclaim the truth or to obscure it.  Now, rhetoric in this sense is a weapon.  It is like the nuclear bomb of communication.  Perhaps unfortunately, rhetoric, like the nuclear weapon, cannot be unmade.  We cannot revert to a time when persuasive speech was not used any more than we can revert to 1943.  Once this weapon is introduced, it cannot be undone.

So, what should good men and women do?  Should they leave this weapon only to those of ill will?  Or should they harness this weapon as a means of communicating the truth?  Either way, it is not rhetoric that carries lies or evil, but it is only the will and character of the speaker who determines to what end rhetoric is used.
Posted by Keith Reich at 11:06 AM