The following is an example of how rhetoric and story complement each other, how they both work to convey a powerful message.

Luke 10:25 Just then a lawyer stood up to test Jesus. “Teacher,” he said, “what must I do to inherit eternal life?”
Luke 10:26 He said to him, “What is written in the law? What do you read there?”
Luke 10:27 He answered, “You shall love the Lord your God with all your heart, and with all your soul, and with all your strength, and with all your mind; and your neighbor as yourself.”
Luke 10:28 And he said to him, “You have given the right answer; do this, and you will live.”
Luke 10:29 But wanting to justify himself, he asked Jesus, “And who is my neighbor?”
Luke 10:30 Jesus replied, “A man was going down from Jerusalem to Jericho, and fell into the hands of robbers, who stripped him, beat him, and went away, leaving him half dead.
Luke 10:31 Now by chance a priest was going down that road; and when he saw him, he passed by on the other side.
Luke 10:32 So likewise a Levite, when he came to the place and saw him, passed by on the other side.
Luke 10:33 But a Samaritan while traveling came near him; and when he saw him, he was moved with pity.
Luke 10:34 He went to him and bandaged his wounds, having poured oil and wine on them. Then he put him on his own animal, brought him to an inn, and took care of him.
Luke 10:35 The next day he took out two denarii, gave them to the innkeeper, and said, ‘Take care of him; and when I come back, I will repay you whatever more you spend.’
Luke 10:36 Which of these three, do you think, was a neighbor to the man who fell into the hands of the robbers?”
Luke 10:37 He said, “The one who showed him mercy.” Jesus said to him, “Go and do likewise.” 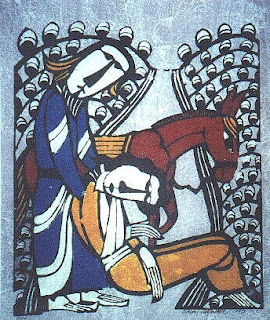 This passage, commonly known as the Parable of the Good Samaritan is a great combination of both rhetoric and story.  The passage begins and ends with a common rhetorical figure of speech, that of hypophora, which is a form of dialogue made up of questions and answers.  Notice that in this passage, the Lawyer begins the questioning, then Jesus turns the tables and asks his own question.  He takes control of the conversation.  Not to be outdone, the clever lawyer asks another question.  Then Jesus really sets the trap, not through another question, at leas not yet.  Instead, he tells a story.  Through this story he communicates several wonderful truths.  First, that being a neighbor has nothing to do with race or ethnicity, or those who are like us.  Moreover, being a neighbor has to do with compassionate actions, not with some other form of kinship.  Once the story is over, Jesus returns to the question and answer session and springs the final trap, getting the Lawyer to admit that the hated Samaritan was indeed the good neighbor.

Notice how neither part of the passage is enough on its own to convey the message. The rhetorical device is used to overcome Jesus' opponent, while the story conveys the message of the compassionate neighbor in a way that propositional language could not.
Posted by Keith Reich at 11:17 AM