Inception and the Rhetorical Question 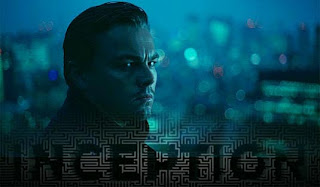 One of the best movies of the year, imho, is Inception.  The remarkably creative, mind bending, surreal story of dream invasion and manipulation, is, at its heart, a story about persuasion.  The story is about implanting an idea in someone's head so that they take it on as their own, so that they own the idea, believe in the idea, and act on the idea.

Take for example the Lukan Jesus' exchange with the synagogue leader in Luke chapter 13.  On the Sabbath Jesus has just cured the "bent" woman after her 18 years of suffering.  Here is the exchange:


Luke 13:14 But the leader of the synagogue, indignant because Jesus had cured on the sabbath, kept saying to the crowd, “There are six days on which work ought to be done; come on those days and be cured, and not on the sabbath day.”
Luke 13:15 But the Lord answered him and said, “You hypocrites! Does not each of you on the sabbath untie his ox or his donkey from the manger, and lead it away to give it water?
Luke 13:16 And ought not this woman, a daughter of Abraham whom Satan bound for eighteen long years, be set free from this bondage on the sabbath day?”
Luke 13:17 When he said this, all his opponents were put to shame; and the entire crowd was rejoicing at all the wonderful things that he was doing.

The Synagogue leader makes this an issue of law.  Jesus makes it an issue of compassion.  Jesus does not directly respond to his opponents accusation.  Instead, he takes his position, that it is right to heal on the Sabbath, and crafts two rhetorical questions.  To both questions, there is only one answer.  Yes, those listening will have compassion on their donkeys on the Sabbath, and Yes, this woman ought to be set free on the Sabbath.  Yet, instead of just stating his idea, Jesus places his view in the form of the rhetorical question so that his idea now becomes that of the audience.  They supply the answer to the question.  They now own the answer.  They are now convinced.  Luke's narration of the response of Jesus' opponents is telling: the audience has now owned Jesus' view and thus put Jesus' opponents to shame.  Jesus, through rhetorical question has implanted this idea in the minds of the audience and they have made it their own.
Posted by Keith Reich at 1:38 PM